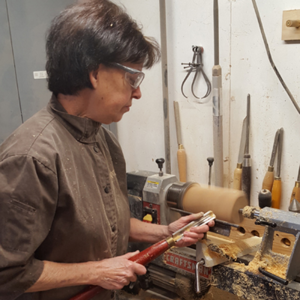 Lyndal and I were at the American Association of Woodturners 25th Anniversary Symposium in St. Paul, Minnesota in 2011, touring the vendors area.  I noticed someone demonstrating pyrography/woodburning and asked Lyndal if he wanted a woodburner for Christmas.  He said "I guess so", so I bought one for him.  I kept watching the pyrographer and asked a bunch of questions.  Long story/short, I do the pyrography and water coloring on Lyndal's turnings now.